Wish You Were Here by Pink Floyd

Welcome to Guitar Animal’s 100th video! We may be young, but we’re mighty.

We thought our 100th guitar lesson should be something special. So here’s one of the best songs ever written. Wish You Were Here by Pink Floyd. Some time and effort were put into the guitar tab and we’re fairly certain it’s the most accurate version of this song you’ll find online.

In this 3 part lesson, we’ll cover the iconic instantly recognizable intro, the solo, and the verse. Let’s go! 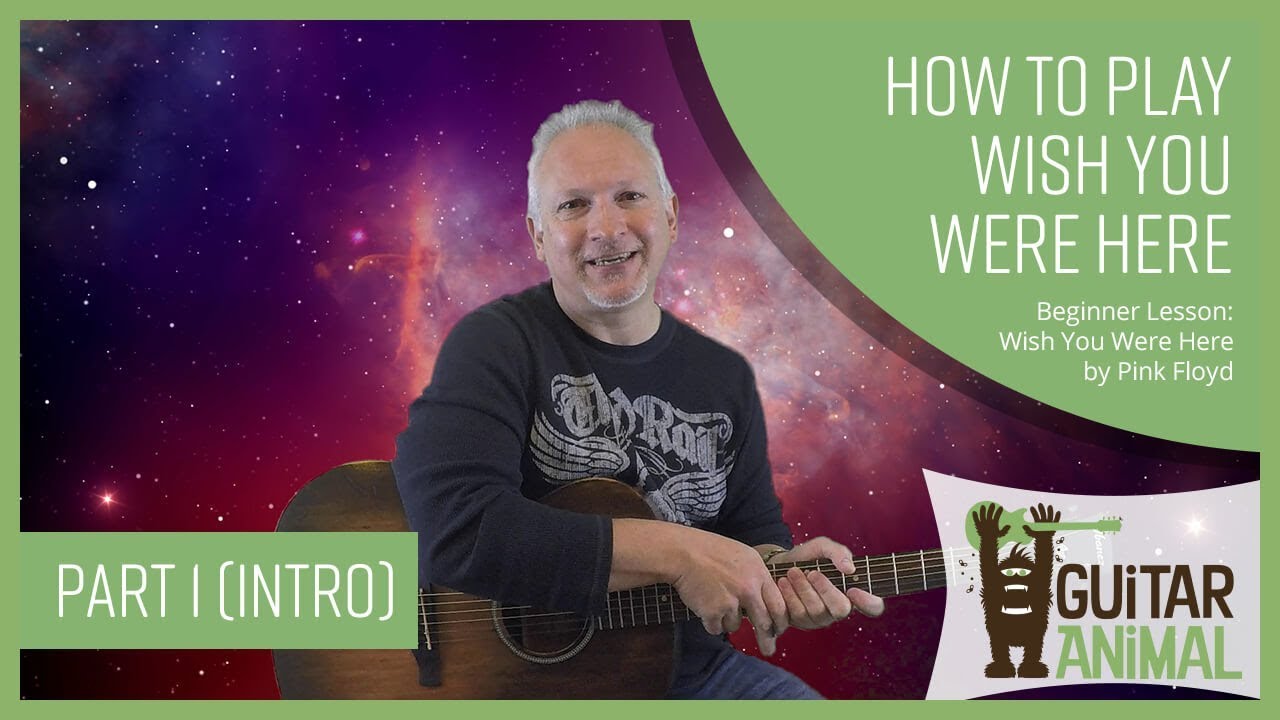 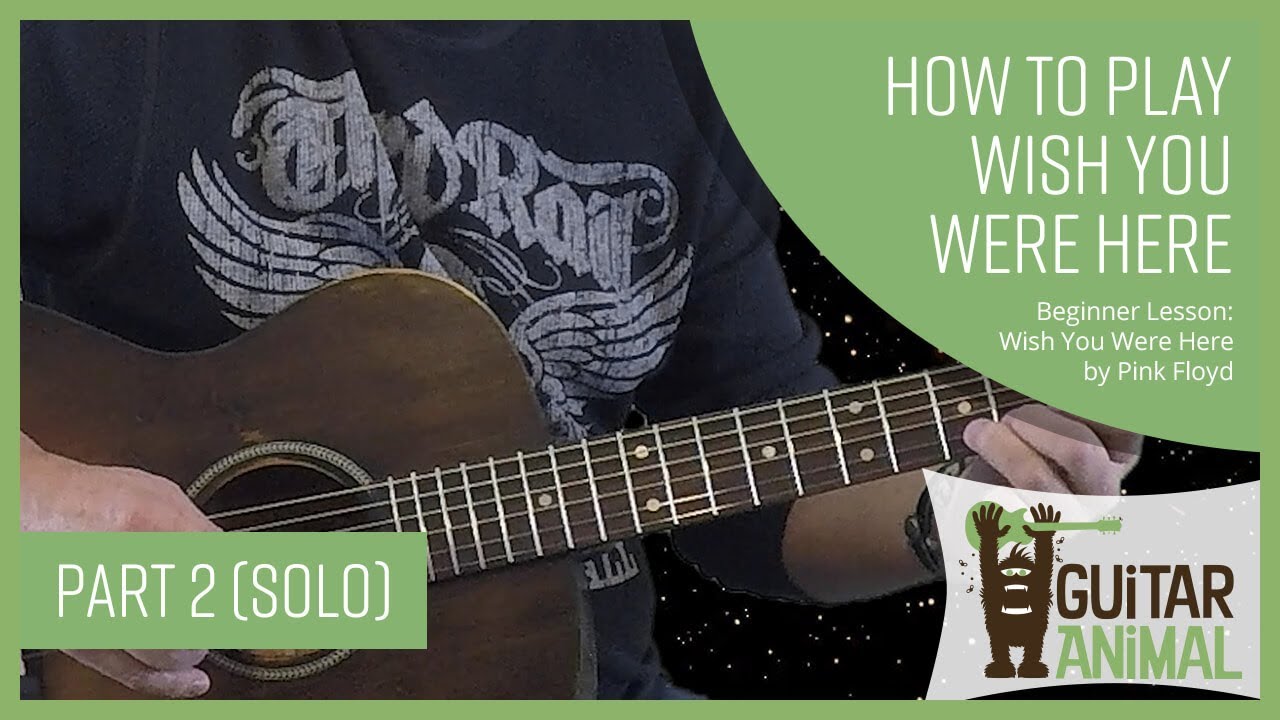 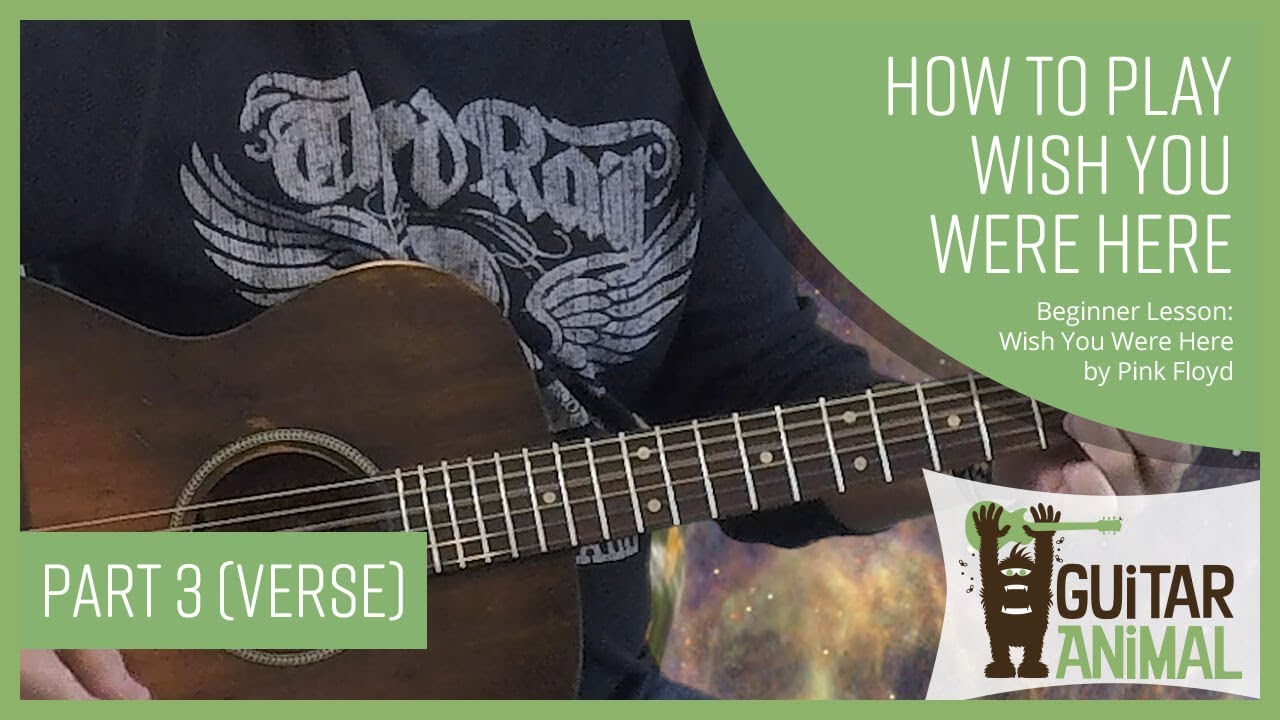 00:07 Hey guys, welcome back to Guitar Animal and today’s a special day for us here at Guitar Animal This is our 100th video. That’s right, 100 videos we have shot and we’re pretty excited by that. Also, we are in our new studios here. Guitar Animal Studios Mach II and we, we were doing so well online, we just had to get a new studio. So we built one. So this is awesome. Hope you guys can tell the difference. And today we’re going to do an awesome video, but before we get to that, I want to mention to you all, we are running a special right now for our kickoff, the grand opening of guitar animal. It’s going through about the first of May and you can get special deals. So make sure you go in and tune into guitar animal.com and sign up because you get better prices right now.

00:45 So check that out. And I hope you guys enjoy the a song I’m going to do here for you today. This particular song, it’s really freestyle played. In other words, they don’t repeat a specific rhythm, uh, they tend to just kind of play what they were feeling. So I’m going to, I had to come up with a tab for it and so I really stuck to the original recording on this tab, but as long as you’re playing a single note lines, I know I have not told you what it is yet, but it’s coming. You’ll recognize it as long as you play the single note lines and play the correct chords in the right sequence. You can vary the strumming pattern a little bit pattern a little bit on the chords. You can vary the strumming pattern a little bit on the chords and it will sound great. So feel free to do that. I’m going to try to stick really close to the tab that I have here for the video shoot, but again, I don’t want it to feel really, square and stiff. So let’s see what we can do,

02:24 That’s the intro line that obviously it’s the Wish You Were Here by Pink Floyd. And again, I was sticking really close to the tab that I have available for you, so make sure you go to GuitarAnimal.com and check out the tab on this one. I looked everywhere for a good tab on the intro to the song and everything that I found just really did not match the original recording. Now on the original recording, they did give you that sound as if you were going through tuning a radio and listening to the song to a radio set like an old fashioned radio, said the actual sound of it was degraded and sounded like it was going through a small speaker. So I listened very closely to and tried to match in one take the best I could to what they were doing. Um, I noticed that they actually recorded this in two tracks because you have one guitar doing that to another one doing the strumming.

03:12 I heard some overlap on that. So again, I adjusted it and made it available for one guitar part. So I hope you guys enjoy it. Again, Guitar Animal.com is where you want to check this out, download the tabs, and then watch the video. Also make sure that you’re using the slowdown feature and the looper functions which are available there for you, and it will be very easy, a lot easier to get through this. I would consider this a beginner, but a little bit more of an advanced beginner if there is such a thing, someone who at least can play the chords very easily and not have to fight to go back and forth between single notes and chords. So first thing I want to just talk a little bit about the chord that I’m playing on this. Um, the thing that’s unique on all these cords is I’m holding down the first and the second strings at the third fret constantly gives you the sound of a G on top.

04:01 If I’m playing the second fret on the fourth string with that, that’s called an E minor 7 chord. And that’s one of the three chords that are played, and this first chords that are played in this first part. E minor 7. I’m holding these second fret of the fourth string, the open third string. And the third fret of the first two strings when I change that to an open fourth string, open third string, and the two first strings first and second string there at the third fret. That’s a G chord, G5 chord, back to e minor.

05:25 Then we’re going to go back to a single single note line e minor seven again.

05:55 So again, we’re shifting gears to the entire piece, single nodes, chord. Single notes, chord. As long as you have that in your mind, maybe even highlight with a highlighter on your printed sheet, the single notes, and then you’ll be able to kind of keep that in mind. I did put the cord strumming patterns up and down there, bracketed underneath the chords. So a staple shape will be a downstream towards the floor V strum towards the ceiling. And again, with the tablature sheet, I think you won’t have any problem with this. All right guys, because that’s how you play the first part of wish you were here, our 100 video and stay tuned. We’re going to do the solo section, which is going to be the solo section on an acoustic. So we’re going to be bending some heavy strings. Stated.

Be the first to learn about new lessons and
occasional super-secret stuff when we’re feeling crafty.