If you’re just starting to play guitar, this makes a great first song for you. Learn to play Three Little Birds by Bob Marley. Just 3 basic chords. Slap a capo on the 2nd fret and let’s play!

Don’t forget – Guitar Animal members have a looping function built into the player. Just hover/tap over the player and click the A/B Loop button. From there you can set your own custom in and out points to loop over and over until you’ve got this song down. It’s a better way to learn! 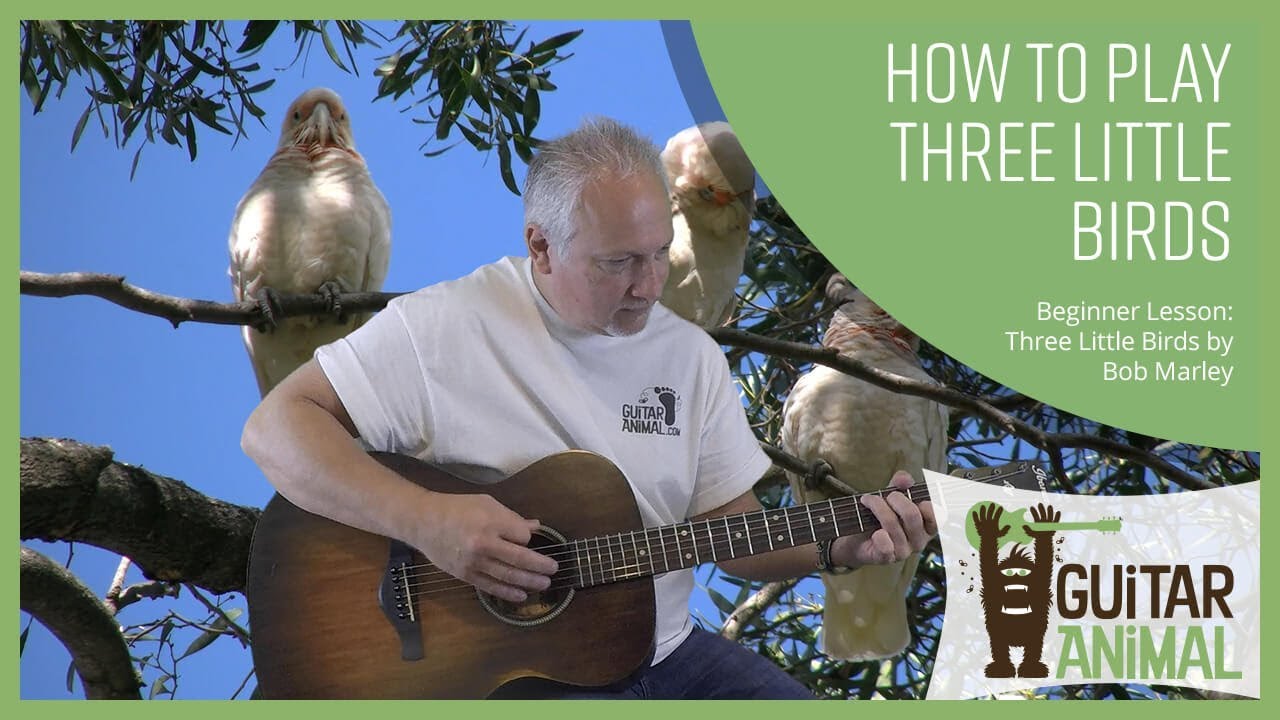 HINT: Did you know that Guitar Animal members have instant access to our custom video player? Set your own loop points and slow down the playback, making the very best of your practice time! SIGN UP FOR A FREE TRIAL. No credit card required.

00:09 Hey guys, welcome back to GuitarAnimal.com. This is Trent. And today I’m going to cover a song by Bob Marley, Three Little Birds. This particular song is a great song, is probably one of his most popular songs. It’s in the key of A. and if you go to GuitarAnimal.com and download the tab sheet, you will see that everything’s written with chord names like G, C and D, but it also notes that the capo is at the second fret of the guitar. So I am using a capo here and we refer to this chord here. It looks like a G chord as a G. Even though we know with a capo it would not be G, this would actually be in a chord, but to keep it from being confusing, we want to make sure that you grab the right chord shape. So we usually, when we’re using the capo by their shape that they would be named if they were open. So in other words, this is the G shape when the guitar is open. Capo second fret. We’ve moved it up and it’s turned it into an A chord, but if I called it an A chord, you might make an A shape.

00:57 So we call it the G chord and that’s pretty much normal. Everybody does that in the guitar world. If you don’t know about using capos, they do have a video at GuitarAnimal.com on the use of capo. I recommend that you stop the video here, go there and watch that video before you try this, but we’re basically setting our guitar capo at the second fret of the guitar, bringing everything up a whole step so my G will sound like an A, my C will sound like a D, and my D sounds like an E. So we’re playing in the key of A as opposed to the key of G. Now for those of you that do not have a capo, even though the song was recorded in A, it could be played in G. At the end of this video, I will play it in G. That would be without the capo two frets lower, so you can play along with that if you want. All right, so we’re going to start with the chorus on this particular song. That’s the way it was recorded and it includes the chords G and C. And the strum we’re going to use for this particular song, is going to be what’s called the island strum. It’s a very popular strum pattern, so you want to learn it because you will see it again in other songs

02:01 Again, if you’d look at it, GuitarAnimal.com you’ll be able to download the sheet for this and you’ll see that pattern marked out as well as the down strums which looked like a stable shape and a V which indicates an upstrum. So again the island strum is

02:17 So let’s go through the chorus on Three Little Birds.

02:52 That’s the chorus, or just going from G chord to the C chord back to the G chord. And we repeat. And the strum patterns down, down, up, up, down, up, and that’s our island strum pattern. Next step is going to be the verse. All right guys, this is going to be the verse for three little birds. This particular section requires use of the G chord, a D chord and the C chord. Again, go to get GuitarAnimal.com. You’ll get the series of these chords printed out for you and work from the sheet. It’s a lot easier to learn this, so starting with the G. Island strum.

05:09 You can hear when the key of G, it’s a lot deeper. Sound a little bit different than the original song. So when you do change, a key of a song it does affect the overall experience of listening to that song. But if you don’t have a capo play in the key of G works just fine. I would recommend picking yourself up a capo. Make sure you check out our video on capos because we use them all the time here. We can get all kinds of extra sounds out of your guitar, so I recommend them. Have a great day.

For one low monthly price, you’ll gain access to everything Guitar Animal has to offer. FIRST 7 DAYS FREE! No credit card required.