Greta Van Fleet sounds a lot like Led Zeppelin. Which is pretty amazing for such a young band. Formed in Frankenmuth, Michigan in 2012. Their popularity is exploding right now. Check out Safari Song. Guitar Animal will definitely be covering more of their work. Give this Intermediate to Advanced lesson a try. Use the video loop and slow down to help you nail the riffs. 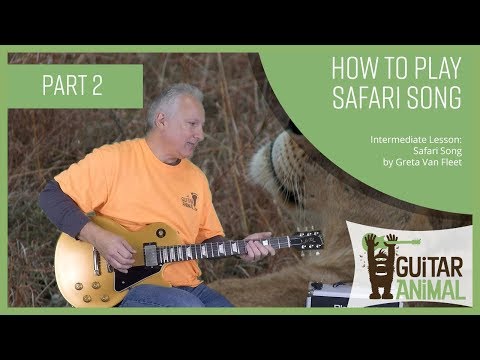 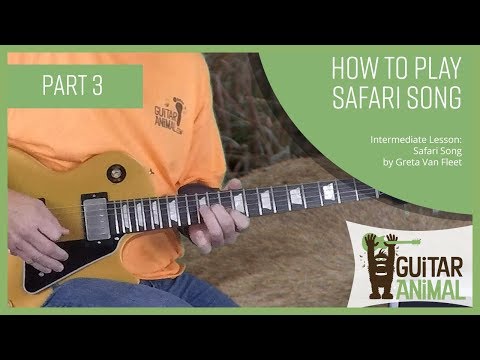 00:08 Hey guys, welcome back to GuitarAnimal.com this is Trent. Today I’m going to show you a song from a relatively new band, one of my favorites, Greta Van Feet, they’re out of Frankenmuth, Michigan. They sound a lot like Led Zeppelin, so maybe that’s why I dig ’em. So check this out. We’re going to do a Safari Song today and don’t forget you can go to GuitarAnimal.com, you can use our looper function and go over these riffs as many times as you need to, slow them down so it makes it easier for you to get. And we will also have a tab there for you so you can check that out. And then let’s hear what it sounds like.

01:00 That’s the first part of the song. I’m going to go through that a little bit slower. That’s what it sounds like when they’re playing at full speed. I, we’re doing a lot of bends on this particular piece, so I’m going to talk a little bit about bends. If you do not know how to do bends or they’re new to you, I would recommend that you go to my video on bends, which isn’t shot yet, but I will have it soon. So check it out. What you’re going to do is probably want to use a guitar tuner, like a snark guitar tuner, and this is something that you can clip on the headstock of your guitar and you can watch and see what you actually attain the bend that you want to attain. In other words, do you want to want to do a half-step bend or a full step bend, a half-step then will be bending a note so it sounds like the one fret higher and a full step back would be bending a note, so it sounds like a note two frets higher. All right, so on this particular song, the first note we’re going to bend, and by the way on this first where he goes back and forth between half step bends and full step bends. So you really have to have bends down to be able to do that accurately and quickly. The first bend that we’re doing is we’re going to bend the fourth fret on our third string, which is a where the third string is G, A, B. It’s a B note. I want to bend that B note on the fourth fret of the third string a full step to sound like a C sharp. That’s my target note. I bend this until I get a c sharp. If you’re using your tuner on your head stock, you can watch it and see it change from B to C and then to C sharp and you just want to make sure you can do that accurately. When we’re actually playing in a band. We’re going to listen with our ears to know when we get to the right note, but when you’re just beginning, watching it on the tuner is fine until you get the feel for it. So we’re going to bend that 4th fret for it to sound like the note on the sixth fret. We start off with an open A note. A little bit of vibrato there. Just shaking my hand and then we’re going to go into the motif of this. Now those two bends, I’m bending the forth the forth fret again, but I’m only bending them a half-step, so I’m going to bend B note to sound like a C note. Again, use your tuner on your headstock. You can watch that happen. Then a full-step. So I started out with full step bend, half step, half step full-step. You really want to go to GuitarAnimal.com download the tablature and look at it. I have it all laid out for you so you keep track of the steps as far as which ones are which ones are half step and what the pattern is. So we’re going to go… So I went full step bend a half step, full step, half step, then two whole steps, a pull off. A note to open. Then we’re going to hit G, and D. I use G5 sometimes. Sounds AC/DC. Very heavy sounding chord . Just leaving that fifth string out. I don’t play the second fret. Just let my finger that’s holding down the sixth string mute out the fifth string. However, Greta Van Fleet, they’re actually using the G. So use the full G. Then back to A. We have a double pull off series there that’s going between this fourth fret and the second fret on both your third string and then your fourth string. When we get to the fifth string, we’re going to be playing third fret second fret open, so it goes like this 4, 2, open on the third string, and then 4, 2, open on the fourth string and then again 4, 2, open on the fourth string. And then 3, 2, open on the fifth string It’s rather quick. It’s pretty quick riff. Have to just get that roll. Might need to rehearse that a little bit. Rehearse it slower and make sure that when you were doing a pull off, you’re pulling down before you let go of the string. Really flipping the string with your fingertips. Your left hand. And then again, G and D. So that whole first part again. Open, full bend…

03:04 Those are the first two sections, and again, you’re going to have to rehearse this a lot to get it up to speed. There’s some good live video of the band playing the song, so check it out, see what you think. All right, so I’m gonna. Go through that whole piece now slow.

06:22 Again. If you go to GuitarAnimal.com you can set your loop points and you can slow this down and listen to it as many times as you need to. These riffs are a little bit complex to play, so I would expect that it would take some time to get them down up to speed. All right. I’m going to show you the next section in the following video.