Jim Croce recorded a lot of great songs in his all too short life. Best known for songs like Time In A Bottle, Operator, Bad Bad Leroy Brown and so many more. Here we’re covering a lesser known Jim Croce song, but it’s very fun to play and great for beginners. Roller Derby Queen sounds great when played on either electric or acoustic guitar. 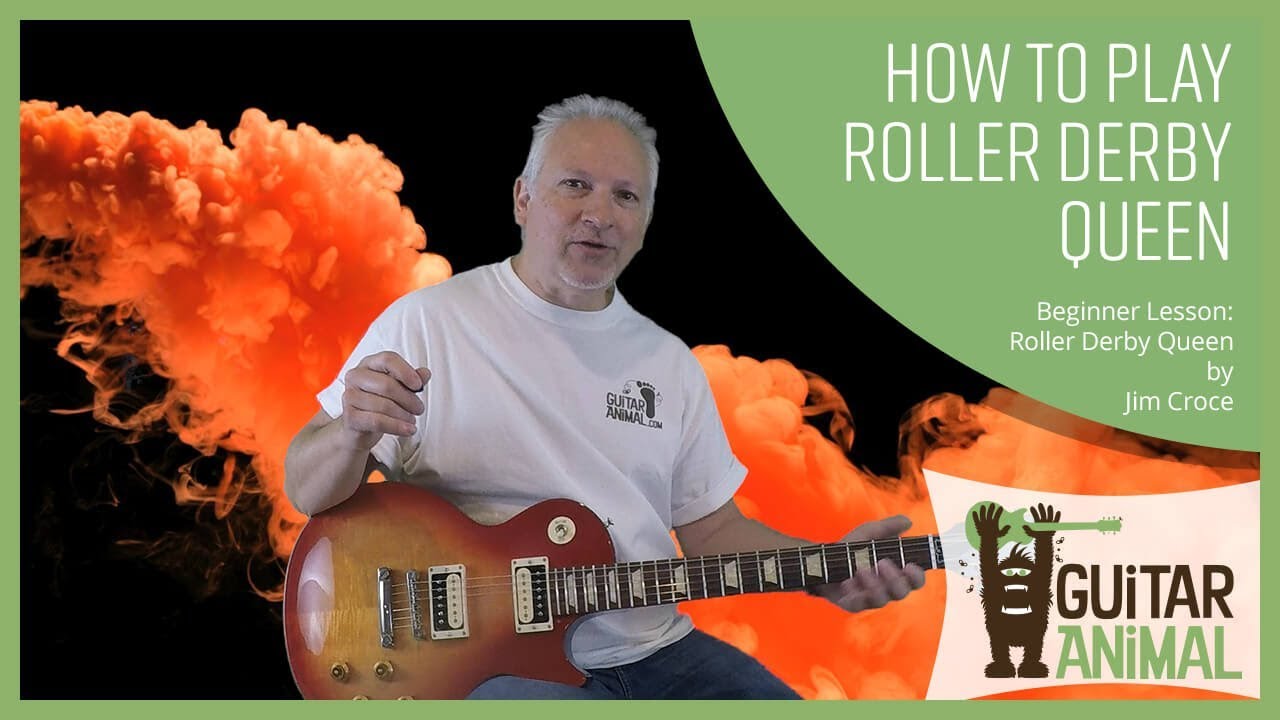 00:05 Hey guys, welcome back to GuitarAnimal.com. This is Trent. Today I’m going to show you a Jim Croce. This is one that’s a little more obscure. You may not have heard of it. So get on Youtube and check it out. The guy is an amazing artist. Or he was. It’s awesome. It’s called Roller Derby Queen. I’m going to do this one today on the electric guitar and then then I’ll play it for you on Acoustic Guitar. So I have two different versions of it. It sounds great. On both of them. I actually kind of prefer the acoustic, but I wanted to show it to you on electric for all you electric players. That you can pull it off on this. I would start with a mildly distorted tone. Just a little bit of edge to it. So it’s a Boogie Woogie type song, so it sounds better that way. So here we go. Rolling Derby Queen.

01:10 So check it out. We’re gonna be using cords E, A7 and B7. If you’re not familiar with those chords, I encourage you to, to GuitarAnimal.com, download the sheet on this. We have a tab sheet available for this at the bottom of the video, and it will show you the tabs and the charts for this song so you can learn these chords. I’ll walk you through them real quick here and then we’ll get to playing it. First one is just a basic E chord, the open position. It’s going to be the open first, second and sixth strings, second fret of your fourth string, and your fifth string. First fret of your third string. That’s the E chord it’s an E major chord. The second chord, in the song is an A 7. I’m going to bar the second, third, and fourth strings at the second fret with my index finger, and then I use my ring finger to hold the third fret of the first string.

02:38 We’re going to place it on the third, fourth, and fifth strings. And so that’s taking shape that may be familiar to you. And placing it in a different position will help you get your B7 chord down more quickly. Uh, in addition to that, and the chorus will be using an regular G chord. I’m using third fret on the first and second strings, second fret on the fifth string, third fret on the sixth. And we’re going to cover the chorus in the second part of this video. So I’ll go over that again for you for right now we’re just going to be playing E, A7 and B7. Alright, so this is roller Derby Queen. Check it out. Also, I should mention the strumming pattern and using here’s an eighth note, strum, which will be one and two and three and four and doing down in upstrokes and all that. I want to emphasize a little bit of accent on the second and the fourth beat. So I’m going to hit those a little bit harder. So a little bit harder, a little bit louder on the second floor to kind of push the song along. Alright, I’m going to go along a little slower now. Play a little bit less gain and count with you. So we start with E

04:30 Again. I encourage you to go to GuitarAnimal.com. Download the tab sheet for this. It will be a lot easier to follow along. Next up is going to be the course. All right guys, here’s the chorus.

04:51 Alright, so the chords I’m using for that particular section are going to be a G, for you beginners, the three finger G, where you’re holding the first string, third fret, six string, third fret, and fifth string, second fret. That will be fine, and it was actually using that for this example here. You could also use the, for lack of a better term four finger G, we’re actually holding the first two strings at the third fret as well as the sixth string, third fret, fifth string, second fret. Either one of those will work, but for the beginners, the three finger, G is fine. Works great. Sounds good. It was probably recorded that way initially, so I would go with that. We have our A7 chord again here, which is the second fret of the second, third and fourth strings, third fret of the second, and first string, and then we’ve got our E. Open first and second first fret on the third string, second fret on the fourth and fifth strings, sixth string open at the very end of this, we play a B5 chord with that is it doesn’t have to be a bar chord. We’re going to hold these second fret of the fifth string, fourth fret of the middle two strings, and just play those three strings. Again, 8th note strum…

06:04 Very powerful sounding chord and that’s the only chord that requires you to come up off of the open position. This particular song, right? Playing it slowly through the chorus with a little bit cleaner Sound, I’ll count for you. We start with the G.

06:36 Back to the next verse. Again, I encourage you to go to GuitarAnimal.com. Check out the sheets that we have on this, download them and print them and I think it be very easy for you to pick the song up. Also check out the original song on Youtube. I think you will enjoy it. Alright guys, in here, I’m going to cover roller Derby Queen on the Acoustic Guitar. I’m doing that because it was really the original song is on the acoustic guitar and it sounds really good.on the acoustic. I wanted to cover it on electric earlier because for you that don’t have an acoustic guitar, you can still play the song. Many of the songs will go back and forth between acoustic and electric. So just try them. But here we go, roller derby between on the acoustic.

07:49 Again, make sure you go to GuitarAnimal.com, check out these videos and the tabs that we have available. We also have slow down features there and looping functions for all you members. So make sure you take full advantage of that. It makes this process a lot easier, quicker to learn, and a lot less frustrating. Check it out, see you next time.

Be the first to learn about new lessons and
occasional super-secret stuff when we’re feeling crafty.